Yes. But the poison doesn’t affect humans the same way it affects smaller animals. If a human or a larger animal were to eat a Monarch caterpillar or butterfly , they might get an upset stomach. Luckily, most humans don’t eat caterpillars or butterflies, and both forms of the Monarch are too small for other animals to want to eat. 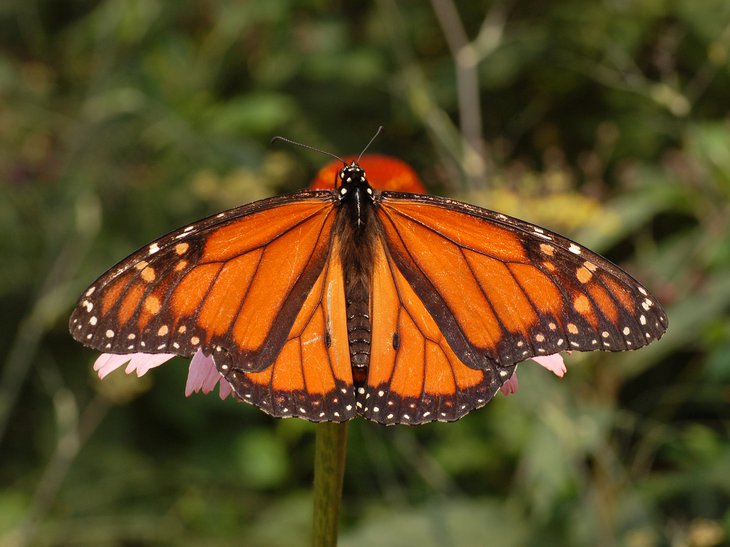 The smaller animals, such as birds and rodents who would want to eat the Monarch caterpillar or butterfly could die from the Monarch’s poison.

The Monarch butterfly is the most beautiful butterfly in the world. Hence, its royal name. It has a breathtaking blend of black and bright orange colors, making it easy to detect and therefore a seemingly easy target to predators.

But rather than being a target, the colors of the Monarch serve as a warning system to possible predators. For smaller animals, the Monarch caterpillar and butterfly is one of the most poisonous species of all insects in the wild. Most predators know not to eat it. Others who try it won’t make the same mistake again.

Why Are Monarch Butterflies Poisonous?

The Monarch butterfly is a migratory species . Adults of the second generation of the species migrate over 3,000 miles from their northern homes to California or Mexico. There are so many plants in the wild but, no matter how far the Monarch butterfly travels, it always returns to a certain plant where it lays its eggs, this plant is known as the milkweed.

The milkweed contains a white, milky sap that oozes from its stems and leaves when it is cut. This sap makes the plant poisonous. When caterpillars of the Monarch butterfly feed on the leaves of the milkweed plant, they ingest the toxins of this plant and they store it in their bodies. Caterpillars eat a lot of the milkweed – up to 20 leaves per day! – and when they finally molt into chrysalides for their transformation to take place, the adult Monarch butterfly leaves the chrysalis as a poisonous butterfly due to the toxins ingested during its caterpillar stage.

The toxin in the milkweed is known as cardinolide aglycones and even though it does not usually cause death to predators, it makes them very sick and uncomfortable when they feed on the Monarch butterfly. The milkweed toxin is also poisonous when ingested in large quantities by grazing animals. It is also lethal to human beings when taken in large quantities.

The Milkweed Plant and Its Relation to the Monarch Butterfly

In order to distinguish the extremely poisonous milkweed varieties from the mildly poisonous varieties, there are physical characteristics that you can look at. The highly poisonous species of the milkweed have whorled narrow leaves while the mildly poisonous species have broad leaves. The most poisonous milkweed species is the Labriform milkweed, scientifically known as Asclepias labriformis. It grows naturally and can, therefore, be found in all hardy USA zones of 4 to 8. The western whorled milkweed, Asclepias subverticillata, is the second most poisonous after the Labriform milkweed and it is hardy in zones 5 to 10. The wooly pod and the Mexican whorled milkweed are also highly poisonous and they are hardy in zones 8 to 10 and 3 to 10, respectively.

The second reason is that the Monarch needs the milkweed in order to survive. By ingesting its toxins, it is able to prevent itself from becoming a savory treat to predators. During migration, the butterflies encounter many types of predators apart from the common ones in its home area. Having milkweed toxin in their system ensures that they survive migration so that they can give rise to a new generation that will make it back to the original home after the migration period is over.

Effects on Milkweed on Animals

Planting milkweed in your yard is the only way for you to lure the beautiful Monarch butterflies. You can help Monarchs find the milkweed in your yard by raising some Monarch caterpillars in a butterfly growing kit . You can raise the Monarch caterpillars into adult butterflies and then release them into your yard. They will find your milkweed and lay new eggs on it. After they migrate, the next generation of Monarchs will somehow remember the exact location their ancestors came from, and return to your yard to continue your population.

But as much as you want to have these magnificent insects on your property, there are some downsides to having milkweed if you keep other animals. This plant is very poisonous to animals when eaten in large quantities. Sheep, cattle, and sometimes even horses can die from grazing on too much milkweed . It is especially toxic during its active growing season. The milkweed plant is very easy to get into the food of the animals especially in areas where it grows naturally. The leaves and stems of the plant have the highest amount of toxins and they are the parts that animals love to eat most. Hay fed to animals can also contain the milkweed plant and can be very dangerous to the animals.

If a sheep eats 30 to 100 grams of milkweed leaves, it dies of poisoning within a few hours. The longest it can live is 2 to 4 days. The cardenolides present in the milkweed cause electrolyte imbalances in the heart muscles of the animal, resulting in cardiac failure. The signs of poisoning before death include difficulty breathing, elevated temperatures, dilated pupils, violent spasms, respiratory paralysis, bloating, and the congestion of visceral organs among others. To prevent animals from feeding on the milkweed plant, keep them away from areas where milkweed is dominant, such as areas along stock driveways. Supply them with food during trailing so that they will not be tempted to eat plants along the way.

Poultry can also be affected by the consumption of milkweed, and they should, therefore, be kept away from the plant as it kills them when they ingest it. They display symptoms like excess salivation, incoordination, and violent seizures among others. The same will happen to cats or dogs that chew on milkweed.

It is very important that you avoid the consumption of milkweed by your animals because there is no antidote for milkweed poisoning. Although there are medicines that the veterinarian can prescribe to minimize the toxin absorption, the survival of the animal will depend on the number of toxins it has ingested and how fast the treatment was sought. Either way, prevention is better than cure.

Wild food enthusiasts can eat almost anything. This is why they even consider the milkweed to be an edible plant. In addition to the level of toxicity of the milkweed depending on the species of the plant, it is also dependent on the age of the plant, the part of the plant, and how it is prepared and eaten. The wild food enthusiasts consume the young leaves, shoots, and buds of the plant. They boil them and discard the water. While feeding, it is advisable not to eat the stems, pods, seeds, and leaves of older milkweed plants. The roots of the milkweed are the least toxic and some numerous Native American tribes boil and eat the roots. The leaves are the most toxic.

Consumption in large amounts of the milkweed leads to severe poisoning and even death. Most people do not find it worth the risk of going through the trouble of boiling the milkweed and discarding the water because some toxins will always remain in the plant. The signs of milkweed poisoning are muscle spasms, difficulty breathing, fever, and dilated pupils among other symptoms.

Careful handling of the milkweed is also advised because of the danger associated with the sap discharge that oozes from the plant. When the sap discharge comes into contact with your eyes, it can cause severe irritation. In the event that this happens, wash your hands and eyes with water immediately to avoid permanent eye damage.

Benefits of the Milkweed

Milkweed contains latex. The latex cures the plant of any wounds and becomes very sticky and elastic after it is dried. For this reason, the milkweed plant is known to have medicinal properties. The sap of the milkweed is known to cure warts and ringworms. It is important to note that the “milk” that oozes from the milkweed is not the sap but a secretion. It is also very important in quickly drying physical wounds on people and animals.

The roots of the milkweed are chewed to cure dysentery. The plant has also been proven to help soften and remove kidney stones with no adverse reactions. It has a reputation for highly improving lung conditions through the relaxing of the bronchioles and liquefying mucus in the lungs. For this reason, it solves breathing conditions, such as asthma, bronchitis, and tuberculosis.

Are Monarch butterflies poisonous? Yes, but only because the caterpillars eat milkweed, and the toxins from the milkweed stay in their system their entire lifespan .

The milkweed is currently an endangered plant species. This is because the government and animal control organizations are working on clearing the milkweed that naturally occurs in grazing fields and by the roadside, in order to reduce the death of farm animals from milkweed poisoning. Pesticides and a few drugs are also being made from milkweed and this could lead to the extinction of milkweed, eventually leading to the extinction of the Monarch butterfly.

In the case of poisoning the farm animals, preventive measures have to be taken to ensure that the animals do not feed on the milkweed. Getting rid of it is not the solution as it could lead to worse consequences of not having the Monarch butterfly in existence.

If you want to lure Monarch butterflies to your yard, plant plenty of milkweed. If they don’t come on their own, you can raise them with the help of a butterfly kit and then release them near your milkweed. They will appreciate the food source and return to your yard every season.