In this article, we will cover the Monarch butterfly life cycle . You are most likely already familiar with this butterfly as it is one of the most common species in North America. It belongs to the largest butterfly family, the Nymphalidae, and is also known as the common tiger, wanderer, and black veined brown. The Monarch butterflies are easily recognizable with their black, orange, and white patterned wings. The males are slightly larger and can be distinguished by the two spots on their hindwings, while the females have thicker and darker wing veins. A rare variation of monarchs called nivosus, or more commonly the White Monarch, makes up about one percent of all Monarchs and has light grey wings instead of orange.

The Monarch butterflies who live in the east of North America are unique for their mass migrations in the fall when they sometimes travel up to 3,000 miles in search of a better climate. They usually reside in north and central United States and Canada in the spring and summer and travel all the way to Mexico, Florida, and southern California in the fall. 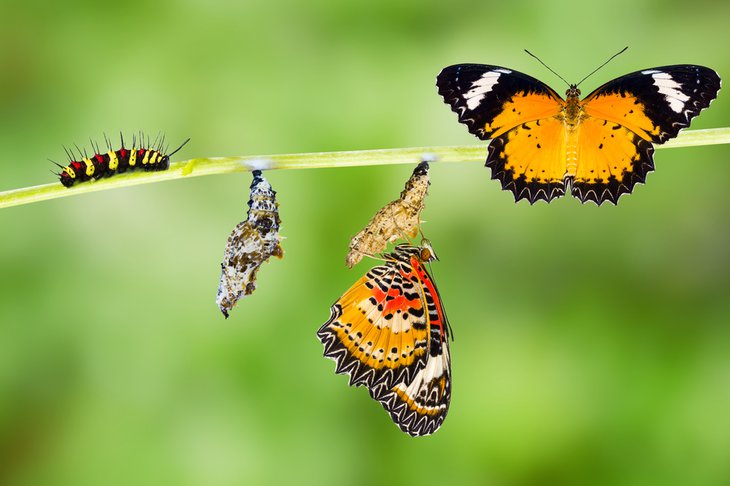 The Monarch life cycle consists of four stages, and these are the egg, the caterpillar (or larvae), the chrysalis (or pupa), and the adult butterfly. 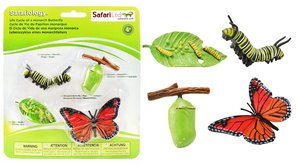 Life Cycle of a Monarch Butterfly

Female Monarch butterflies lay small yellow eggs on the underside of a milkweed leaf, which they find by using sensory organs on their feet. They will also taste the leaf before laying their eggs to test its quality. They lay a few eggs at a time, and repeat this process until they've laid hundreds of eggs. As a matter a fact, they can lay from 300 to 1,200 eggs during their lifetime. If you'd like to see these eggs yourself, it might take you quite some time to find them because they are so small and hidden well. The search, however, will pay off as the sight of them can be pretty fascinating. If you look at the egg closely enough, you can actually see the larva growing inside it.

The egg shapes differ, and while some of them are oval, the others may be round and ribbed. This depends on the butterfly that hatched them. As the larva develops, the egg slightly changes its color, becoming gray when it's about to hatch. The hatching usually happens within four days, sometimes a bit longer. This largely depends on the temperature.

The first meal a caterpillar has as it hatches is its own egg. The egg is packed with nutrients. Afterward, it feeds solely on the milkweed leaves. This is why the adult butterflies always lay their eggs on milkweed plants, as caterpillars are too small to travel to another plant for food. Eating and growing is basically everything that happens in this stage of the Monarch butterfly life cycle.

They grow extremely quickly. In a period of 3 weeks, they are more than 2,500 times larger than at their birth. They grow so quickly by molting, which means they shed the skin they outgrow. The period between the molts is called the instar, and Monarch caterpillars go through about five instars in this stage.

In the first instar, they are white colored and their skin is very soft. This is when they eat their egg and the leaf they hatched on. The second instar is when they get their recognizable colors, and in the third instar, the colors become more vibrant while the tentacles elongate. In the fourth instar, they develop white dots on their prolegs, and in the fifth instar, they start to search for a place for the next stage of their life cycle, the pupa.

The Monarch caterpillar has quite a striking appearance, with its black, white, and yellow stripes. They have three pairs of true legs near the head, and prolegs at their rear, which helps them to climb the plants. They have filaments at both of their ends, so it can be a bit confusing to figure out where their head is at first. Of course, the head is easier to notice while they are eating as the filaments behind their head start to wiggle.

In its final stage, the larva is around 50mm long and weighs 1.5 grams. At this time, it travels to find a protected place, where it weaves a woven silk mat. It hooks onto with its prolegs and hangs downwards in a "J" shape. It hangs there for about 18 hours before it removes its old skin for the last time. This is when it becomes a pupa or chrysalis .

In this stage, it has no eyes or legs, and it can hardly move. However, if it gets disturbed, it may move suddenly as a defense mechanism. The pupa is soft and very weak at the beginning and then hardens into a protective shell. It also becomes green to camouflage and hides from any predators in the area.

This is when the metamorphosis happens. The wings and reproductive organs develop, and the mouth turns into a proboscis. This stage can last up to two weeks. When the butterfly is fully developed, you can clearly see the recognizable wing colors. This indicates that an adult butterfly will soon emerge from the chrysalis and hold on to it for a few hours before it takes its first flight.

When it comes out of the pupa, the butterfly's stomach is full of fluid and its wings are soft and folded. It pumps this fluid through the veins of its wings to enlarge them and make them full and firm. The butterfly then has to wait for a few hours to replenish its body fluid and dry off.

After this period, the Monarch butterfly is ready to fly off in search of food. It feeds on nectar and will usually go to a few different flowers to choose its meal. The adult butterfly remains the same size for its entire life. It uses its antennae to detect pheromones, and its feet to find and taste nectar.

Butterflies also need to drink water, and you can commonly spot a butterfly on wet ground as they like to get their water from the soil. They drink through their proboscis, a sucking tube placed under their heads.

Like most insects, the Monarchs breathe through a number of pores on their abdomen called spiracles. Their wings flap from 300 to 700 times per minute, and they move about 5 miles per hour, which is fairly quick given the fact that humans usually walk from 6 to 8 mph. However, what's really fascinating is that during migration, their speed jumps up to 25 miles per hour.

They can recognize a large spectrum of colors, and can also see UV light. They communicate through scents, and males discharge a chemical from their wings to attract females.

The wingspan of the Monarch butterfly measures from 9 to 10 centimeters, which varies in the migratory and non-migratory butterflies. The shape of the wings change and becomes redder and elongated before migration. Furthermore, the Monarch from North America has larger forewings when compared to the ones in the west.

The life of an adult butterfly mostly revolves around feeding and reproduction, and they are on a constant lookout for a mate. Females lay eggs throughout their lives and males can mate most of the time.

The lifespan and life habits of the Monarch butterfly largely depends on the time of the year. They can be divided into four main generations through the year.

The first generation of Monarch butterflies is hatched in March and April while the third and fourth generation are born from May to August. All of these generations go through the same stages of life, feeding on flowers, mating, and laying eggs. Their lives are very short, as they have an average lifespan of four to six weeks.

The fourth generation of Monarch butterflies, on the other hand, has a very different life. They are born in September and October, and they can live from six to eight months. When the weather gets colder, they start migrating south , usually to Mexico and Southern California. In this period, they are in a semi-dormant state to conserve their energy in the cold winter months. They sleep in massive groups on trees. In March and April, they wake up and go in search for a mate. After they lay eggs, this unique generation dies, as the new, spring generation is born. The new generations continue to mate and lay eggs until September when the new butterflies are ready to migrate.

The Monarch butterfly life cycle is very unique. If you are a butterfly enthusiast and want to be reminded of this beautiful phenomenon at all times, you might like the innovative figurines from Safari Ltd . You can also consider watching their growth firsthand with a Monarch Butterfly Kit . You'll see them grow from caterpillars to chrysalides to butterflies. You can release them for the migratory season or let them overwinter in the habitat.

Furthermore, if you'd like to help in preserving this species, you should avoid using harmful pesticides and herbicides, as well as genetically engineered seeds. You could also plant some native milkweed plants in your garden, and you might see Monarchs come around quite often. Who knows, maybe they'll even choose your plants for laying their eggs.