Have you ever seen butterfly hatching? It’s an amazing sight to behold, especially if you’ve watched the butterfly change through all the cycles of its life.

All insects undergo changes in form as they grow through a process we commonly call metamorphosis. The same thing happens to Monarch butterflies . They undergo complete metamorphosis via four stages: egg, caterpillar (larva), chrysalis (pupa), and adult. Monarch butterflies will need about a month to go from an egg to adult. That’s a lot of changes in such a short lifespan . 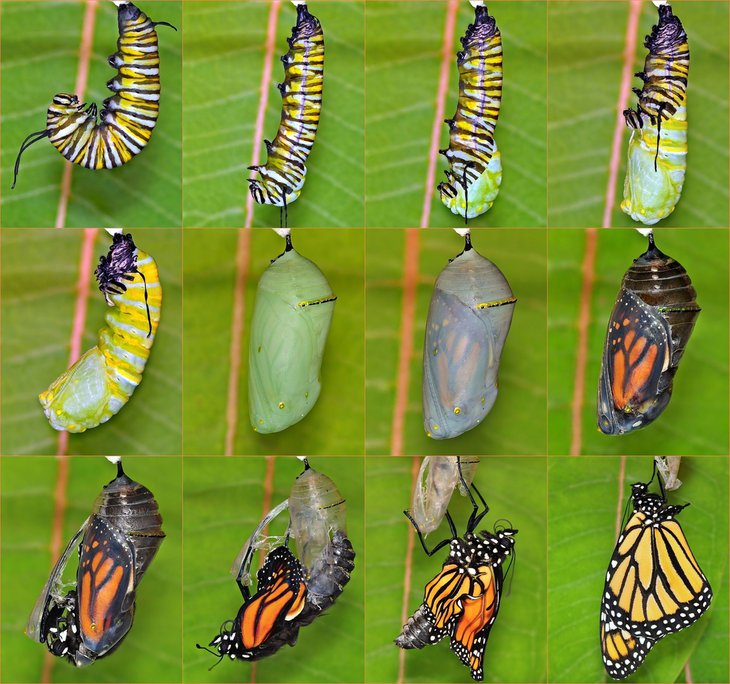 The hormones that circulate through their bodies are what trigger the changes that happen during metamorphosis. Once they reach adulthood, most of these butterflies will live for up to six weeks during the summer, while the migrating Monarchs are able to live for up to nine months during the winter.

The Monarch Butterfly’s Life Cycle: From Egg to Butterfly Hatching

As mentioned above, these butterflies go through four main stages during their life cycle . There are also four different generations in a single year.

You already know what four different stages of a Monarch’s life cycle are. The four generations mean that there will be four different Monarchs in an ancestral line that undergo these four stages in a single year until it is time for everything to start over again with generation one and stage one.

During February and March, the Monarch butterflies from the final hibernating generation will come out of the hibernation process to find their mate. The Monarchs will then start to migrate east and north in order to find a good spot for their eggs. This triggers the generation one and stage one of the new year for the Monarch butterfly.

They will lay eggs on milkweed plants during the months of March and April. These butterflies will hatch into caterpillars, also known as the larvae. It will take roughly around four days for the larva butterfly hatching to occur. The newborn caterpillar won’t do much; it will just eat the milkweed and try to grow. Two weeks after this, when the caterpillar reaches the next stage, it will attach itself and the metamorphosis process will start.

The caterpillar will attach itself to a leaf or a stem using silk, and will form the chrysalis. From the outside, the chrysalis phase that lasts for 10 days may seem like a time of nothingness. However, this is when the most rapid change is happening. The caterpillar’s old body parts will undergo a remarkable transformation within the chrysalis. This transformation is called metamorphosis, and the beautiful parts that characterize the butterflies are developing.

You will then see the newborn butterfly hatching from the chrysalis and start enjoying the short life it has. It will fly and feed on flowers during its lifespan of six weeks. This first generation of the new Monarchs will then lay new eggs for the second generation and die shortly after that. When they lay their eggs, Monarchs can lay up to 100 eggs per day!

The second generation of these beautiful butterflies will be born in May and June. Shortly after, the third generation is born during July and August. All of these Monarchs will go through the exact same butterfly hatching process as the first generation did, laying eggs and then dying only six weeks after they are born.

It’s amazing how these four generations work together so that the population as a whole is able to survive the winter without becoming overpopulated.

After the butterfly hatching and the laying of eggs, butterflies won’t care for their young. However, they will lay their eggs on the host plant appropriately as that plant will be the main food source for the new caterpillars.

As mentioned above, the host plant for Monarch butterflies is milkweed. Females will usually lay only one egg on a single milkweed plant, usually near the top of the plant or on the bottom of a leaf. These eggs are very small, about the size of a pencil tip or a pinhead, and are characterized by yellow or white colors and longitudinal ridges. After the butterfly lays the eggs, they will hatch after about four days.

As the females are laying the eggs, they will produce a very small amount of glue that will attach their eggs to the plant directly. Female butterflies will lay up to 500 eggs over the period of five weeks. The record is 1179!

The female forms each egg inside her body prior to fertilization, including the outer shell that is protecting the larva inside. This shell also has a layer of wax that serves as a protection for the egg from drying out. These eggs have very tiny openings at one end, known as micropyles. These openings go all the way through the shell to provide a way for the male butterfly’s sperm to enter it. The eggs also have raised areas called ridges, which are also formed before the female butterfly lays the egg. If you take a look, you can notice the black head of the caterpillar at the top of the egg. Depending on the temperature, Monarch butterflies will remain in the egg stage for three to five days.

The Monarch Larva, or Caterpillar

Once the egg hatches, it is referred to as a larva. This is the caterpillar stage, and it is full of growth. In this stage, these will-be butterflies will do all of their growing. As a matter of fact, that is practically all they will do during this stage. They will eat almost constantly and take only a few breaks to rest and shed their skin.

Larvae have three body parts just like all other insects: the abdomen, thorax, and head. The head has six pairs of simple eyes, mouthparts, and a pair of short antennae. The interesting thing is that even with six pairs of eyes, caterpillars have very poor vision. That’s why the antennae are there – to help the caterpillar with poor vision to move around, and the sensory organs will help in directing food into its jaws. The spinneret part is what produces silk, which the caterpillar uses to anchor themselves to leaves or stems when they need to.

Each segment has a pair of true legs, while the abdominal segments also have prolegs or so-called false legs. Monarchs, in particular, have five pairs of false legs. These parts have very tiny hooks that will hold the larva on a leaf or its silk mat. The fleshy tentacles at the rear and front ends of the larvae aren’t antennae, but they do play the role of sense organs.

Monarchs breathe oxygen through holes in the sides of their abdomen and thorax called spiracles, just like any other insect. These spiracles are connected to long air tubes that carry oxygen throughout the Monarch’s body.

Once the caterpillar is too large for its skin, it will shed its skin, or molt. During the molting process, the head capsule will fall off first. The old skin will then peel back from the front and the new skin will be formed. This new skin is soft and will provide little protection or support. It will then harden and mold to the caterpillar. Before the caterpillar eats more food from the host plant, it will usually eat the skin that it shed because it is full of nutrients. The whole larval stage will last from 9-14 days, depending on the summer temperature. During that time, it will shed its skin five times.

The Monarch larvae will then hang upside down after they spin a silk mat just before they pupate. The spinneret from the bottom of the head will produce this silk. Once the caterpillar sheds its skin for the last time, it will stab a stem into this silk pad and hang upside down. The stem is called the cremaster.

The process of metamorphosis itself may look like only four different stages. However, the changes are rapid within the pupa. The adult organs, including wings, are developing from cells that are already present in the larva, and the major changes have already begun by the time the larva pupates. The pupal stage is when the transformation is completed. Many caterpillars will spin a silken cocoon in order to protect them as pupae. However, butterflies don’t do this, and so rather than a cocoon, a chrysalis is the name of their pupa stage.

Before the Monarch butterfly hatching event, their orange, white, and black wing patterns are already visible through the covering of the pupa. This doesn’t happen because the pupa is transparent; it happens because the pigmentation is developed at the end of the pupa stage. This intense development stage will last 8-15 days if the summer conditions are normal.

The main job of an adult Monarch butterfly is to mate and lay the eggs for the next generation. These butterflies are not going to mate until they are at least 3-8 days old. When they are ready to mate, they will stay together with their partner for up to 16 hours! Females will start to lay eggs shortly after the first mating, and both males and females are able to mate a couple of times during their lifespan. Adults will live for 2-5 weeks during the summer.

The final generation of the Monarch that emerges in early fall will have a very important job each year. They will migrate to warmer climates: California for western Monarchs or central Mexico for eastern. They will spend the winter there clustered in trees until the temperature starts to allow them to go back to their mating grounds. These adults will live up to 9 months.

You can easily distinguish female from male Monarch butterflies. Males always have a black spot on each wing, which is not the case for the females. The abdomens are also shaped differently in females and males, and the males have veins on the wings that are wider.

Of course, the best way to observe each stage of butterfly life cycle is with a butterfly growing kit . With most kits, you’ll get live caterpillars that you can watch transform into pupae and then watch the butterfly hatching process. You can keep the butterflies in the kit to watch them lay their eggs and start the next generation or you can release them into your yard.

The neat thing about releasing them is that when they migrate south for the winter, they’ll remember where they came from. The Monarchs that left your yard will return the following spring. If they don’t make it all the way back, their children will. We don’t yet understand how butterflies who have never been to a place know how to find the breeding ground of their parents, but they do!

All you need to do to keep a perpetual population of Monarch butterflies in your yard is to keep some healthy milkweed plants. The butterflies will lay their eggs on the milkweed leaves. Then, the caterpillars will eat the leaves and suspends their chrysalises from them. Soon, you’ll see the next generation butterfly hatching!