Where do Monarch Butterflies Spend the Winter? 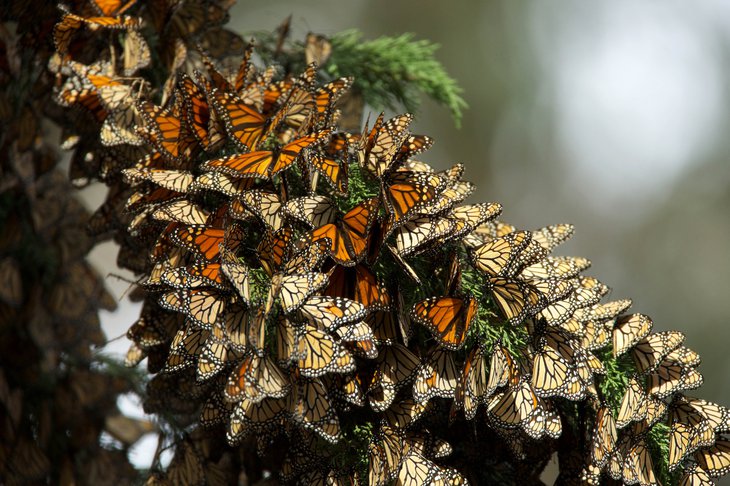 These species use the same trees every year during their hibernation period, which is unusual as the butterflies from this year aren’t the same ones from the last year. The Monarchs from this year are a new generation of butterflies, so how is it possible that they know which trees they should hibernate in? These butterflies are the only insects that migrate to a warmer climate that’s over 2,500 miles away.

How does Monarch Migration Work? 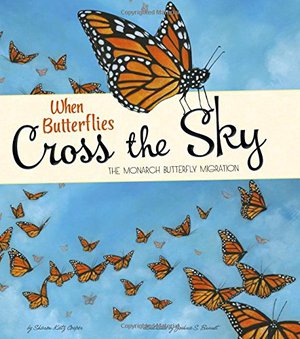 When the temperatures drop off and the days get shorter, Monarch butterflies will start to abandon their normal feeding and breeding territories. They will start searching for a safer place to survive the winter. The Monarch migration map is very unique and interesting.

As mentioned above, the Monarchs will spend the winter in central Mexico’s mountains huddling together in the branches of Oyamel fir trees. These trees are also called sacred firs. They create a microclimate that insects benefit from, according to research scientists. The ecosystem and tree canopy provide a blanket effect for the butterflies, meaning that the temperature is never too low or too high.

After a long winter, the butterflies will go back north to places like Texas, where they will breed and lay eggs on milkweed plants. Only a few days after this, the beautiful black, white, and orange caterpillars will come out of the eggs. The larvae will then consume a lot of milkweed before they form a chrysalis and become adult butterflies.

The new butterflies will, at this point, fly away further north in order to find another patch of milkweed. They will repeat the process over and over again. The Monarchs will cycle through almost five generations while they are traveling as far north as going back to Canada.

And then, when the fall comes back again, the Monarchs will use the air currents to go all the way back to California or Mexico once again. This seems like an impossible achievement for an insect that is so delicate-looking. The Monarchs that head north will die in just seven weeks. This is interesting because when the species starts to go back to Mexico, a so-called “super generation” will be able to live up to eight months. This is what makes the Monarchs that are migrating very unique since they will live much longer than the other butterflies of the same species.

Why do Monarch Butterflies Migrate? How do They Know Where to Go?

According to research analysts, these questions don’t have a clear answer yet. However, there are a couple of theories.

One theory is that when these butterflies are flying north, they are actually following the bloom of milkweed plants – their primary food source. When winter comes and the milkweed plants are dying, the Monarchs are retreating to warmer climates that will protect them from the cold weather.

The second theory is about the Monarchs’ immune systems. Some ecologists are saying that the migration helps protect these butterflies from parasites that accumulate when the summer is ending. The research shows that some adult butterflies are infected with Ophryocytis elektroscirrha, a protozoan parasite. According to research, the butterflies with this infection aren’t able to fly very well, and they can travel only short distances in the wild. Researchers are saying that migration serves to remove Monarchs that are heavily infected, which keeps the infection from spreading and keeps the population as a whole more healthy.

In 2016, a study suggested that the Monarch butterflies are navigating where to go based on their position to the sun. None of these theories have been proven yet, though, and scientists are still trying to find out exactly how their migration works.

The Importance of Monarch Butterflies

These butterflies may seem insignificant and small, but these creatures have always played a very important role in the ecosystems they inhabit.

When Monarch butterflies reach adulthood, they start to visit numerous wildflowers throughout their lifetime as they are looking for nectar that is nutrient-rich. These butterflies will transfer pollen from one plant to another while doing so, which helps the reproduction of those plant species.

Adult Monarch butterflies and even caterpillars are poisonous to predators. This is because their main food source is milkweed and they acquire toxins from these plants. However, some predators are still able to feed off them. Grosbeaks and Orioles are two birds that feast on Monarchs when the winter comes. Flies, wasps, spiders, and ants are also known to feed off caterpillars whenever they can.

To give a short answer, Monarchs aren’t endangered. These butterflies are very common all over the world. In fact, their populations are found even in New Zealand and North Africa.

It’s clear by now that Monarchs that migrate have a very wide range, as shown by the Monarch migration map. And when a species covers such a large area in their migration pattern, there are bound to be lots of threats for them. Some of these threats include milkweed populations that are declining all over the U.S. and Canada, diseases and parasites as mentioned above and even avocado demand in the Mexico region.

One way to help the Monarchs is to plant milkweed in your yard. Not only do the Monarch caterpillars need the milkweed to eat, but you’ll be able to enjoy seeing Monarch butterflies return to your yard year after year to lay their eggs and feed on milkweed nectar.

A very tricky problem for Monarchs, though, is the avocado one, according to research analysts. This is because the people located in the region of Mexico where the Monarchs come to hibernate need a way to make a living. These people are replacing the forests where Monarchs usually stay with avocado plantations, and this is having a bad effect on the Monarchs, causing them to migrate higher up in the mountains.

As of now, 140,000 acres of forest land are proclaimed as protected for Monarchs that come to hibernate over the winter in Mexico. However, some researchers say that a lot of this area is only a zone preventing winds from damaging the areas where these butterflies congregate. Avocado cultivation areas have a lower elevation than what Monarchs prefer, but this is still affecting the forests that these butterflies prefer to migrate to.

Now, let’s say you are a 150-pound person. That amount of weight in milligrams is 68,000,000. So, if you were a Monarch butterfly that traveled 8 kilometers for every milligram of your body weight, you would travel 544,000,000 kilometers or 338,000,000 miles. The total circumference of the Earth is roughly 40,030 kilometers. This means that you would travel around the whole world 13,590 times. Pretty interesting, right? That’s the size in the scale of the Monarch migration map.

Decreasing temperatures and day length, aging milkweed, and a lack of nectar sources trigger a certain change in Monarch butterflies. This is when the migratory generation is born and the migration itself starts.

Unlike generations that live during the summer that live only up to six weeks, migratory generation adults are able to live for up to eight or nine months. A lot of butterflies that are born in late August in the eastern U.S. will stop to reproduce on the way south and will then start to migrate again and look for the warmer climate where they will spend their winter.

From all across southern Canada and the eastern U.S. Monarchs will travel toward Mexico. During their travel, they will stop quite often in search for essential nectar sources and shelter from the unpleasant weather.

These butterflies should reach their destination in early November. After this, they will occupy the Oyamel fir trees. These locations in central Mexico provide water, good shelter, cool temperatures, and enough food that allow Monarchs to have enough energy to survive winter. This generation will then start to journey in March into the southern states and Texas, where they will lay eggs and feed off nectar as they breed and migrate further north.

The generation that’s born first after the winter hibernation will continue to travel from the south to once again recolonize the eastern part of the country. The Monarch of the second and third generation will be alive during the summer, and the fourth generation is usually the one that will start to migrate south again.

Monarchs from the western U.S. will gather to roost in Monterey pine, Monterey cypress, eucalyptus, and other trees that are common on the coastline of California. They will usually arrive in late October.

The nectar and milkweed plants that are available in summer in California, Idaho, Oregon, and Nevada is why western Monarchs stay in these places and are the reason they benefit from these locations. In the desert areas of the southwest, butterflies use the milkweed plants and nectar throughout the most of the year.

The importance of the Monarch migration map is crucial for the whole ecosystem and the existence of many species of plants. Monarch butterflies nature by transferring pollen from one plant to another plant so that the plants can reproduce, and they also have their own spot in the food chain.

Considering the distance they have to travel each year, we can conclude that this species is very determined to continue their existence. The most interesting question is how Monarch butterflies know where to go as they travel back and forth on the Monarch migration map.