Monarch butterflies are certainly a beauty to behold! They are widely regarded among the most beautiful insects not only in North America but anywhere in the world. You will find many things about them amazing. We have put together interesting Monarch butterfly facts, some of which will surely astonish you. Read on!

There Are Different Species Across the World 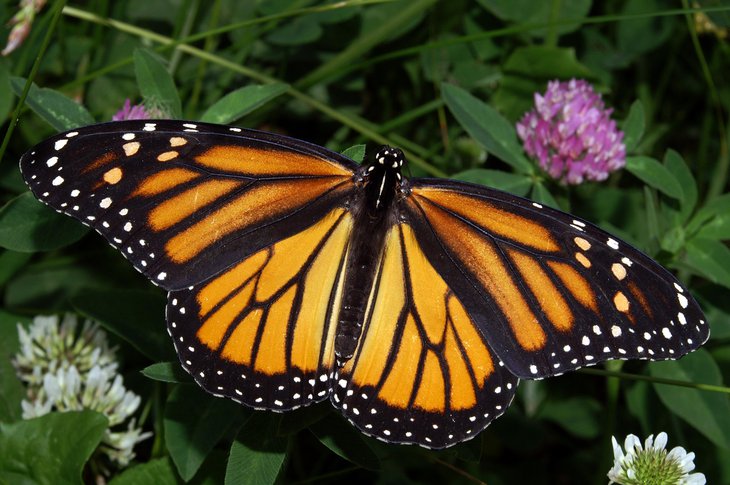 But the species of the butterfly often differ between regions. For example, that which you will find in North America differs from that in South America. But you can find both of these two species in the Caribbean.

The color patterns of these butterflies may also differ, depending on their location.

The Origin of Their Name is Unclear

There are different theories as to how these flying insects came to be called Monarch butterflies. The first use of the term "Monarch" is, however, credited to Samuel H. Scudder.

Some say the name was chosen because these made the largest species of butterflies. Another account has it that early Dutch and English settlers in North America were so impressed by the orange color that they so named it for King William III, Prince of Orange.

Apart from Monarch butterflies, these beautiful insects are known by a variety of names in different places. They are called wanderer butterflies in Australia. Some people also call them milkweed butterflies.

Monarchs Lay Many Eggs in a Day

These butterflies are very prolific when it comes to egg laying. They lay their eggs on the underside of the leaves of the milkweed plant at a rate of one at a time. Doing this, they can lay up to 250 in a day! That’s quite prolific, I’d say.

And if that’s not impressive enough, this surely will be; a Monarch in captivity reportedly laid 1179 eggs in one day!

These eggs are usually light yellow but are creamy white-when freshly laid. Each weighs about 0.50 milligrams and is slightly under 0.90 millimeters in diameter. The eggs hatch in 4-5 days.

A Monarch Caterpillar Sheds (and Eats) Its Skin Several Times

The next stage in the development of a Monarch butterfly after the laying of eggs is the emergence of the caterpillar or larva . This has a gray-black color and a black head.

The caterpillar molts or sheds its skin about five times prior to the pupa stage. The phase between two molting periods is called instar.

One of the most particularly interesting Monarch butterfly facts is that the caterpillar may consume the skin that it sheds in 4 of its 5 molts!

The Monarch Caterpillar is a Gluttonous Eater

The caterpillar of a Monarch butterfly is a ravenous eater. A large one can devour a whole milkweed leaf in under four minutes! The butterflies eat both the leaves and flowers of the milkweed plant.

As a result of their voracious eating habit, these insects grow very fast. This explains the regularity of their skin shedding as well. They gain around 2,700 times their original weight and produce a lot of frass – the name for their poo.

Before shedding its skin for the last time during the fifth instar, the Monarch caterpillar spins a silk to hang from. It hangs upside down in a “J” shape for a duration of around 10-12 hours while changes take place inside its body.

It then proceeds to shed its skin for the last time. A split appears near the head and the skin begins to “unzip,” revealing the pupa or chrysalis. The caterpillar continues to twist and turn until the skin falls off.

The pupa wriggles for a while– the so-called pupa dance. Then, slowly, its skin starts to harden to provide protection for the butterfly that is being formed on the inside. The fully developed Monarch emerges from the chrysalis after a number of days.

Another of the interesting Monarch butterfly facts is that you can easily tell them apart from other butterflies merely by looking at their wing patterns. The orange and black colors on the wings are instantly recognizable.

It is also easy to determine the gender of a particular Monarch by observing their wing patterns. The male has a dark spot at the center of each of its hind wings. The ones with darker veins on their wings are females.

Monarchs Store Poison in Their Bodies

The Monarch butterflies are only good to behold. They are bad for the stomach of any animal. This is because they carry a considerable amount of a poisonous substance inside them that can make a predator sick.

The milkweed plant that Monarch caterpillars feed on contains toxins known as cardiac glycosides. These chemicals, also known as cardenolides, do not do any harm to the developing butterfly and are stored in its tissues. But they taste bad and are poisonous to vertebrates. The poison can even slow a human’s heartbeat.

Although only caterpillars feed on milkweed, the toxins remain in the body of the butterflies for the entirety of their lifespan. This serves as a strong deterrence to predators.

Looking at the colors of the wings of Monarchs, you will certainly find them attractive. But, to these insects, this is not necessarily about beauty. The bright orange of the wing is a warning signal.

The color is the butterfly's own way of telling would-be predators, such as lizards and birds, that something unpleasant awaits if they dare to consume it. The poison of the milkweed will give them an upset stomach or worse.

Some naive predators might still go ahead and eat Monarch butterflies, but the experience of what follows will make them pay more attention to the warning color next time if they survived.

Monarch butterflies don’t actually feed on milkweed; only the caterpillars do. Nectar is the main source of food and energy for the adults. They get this from different species of flowers. They can also eat fruit.

Monarch Butterflies Smell with Their Antennae

These butterflies perceive odors using their antennae! One of the interesting Monarch butterfly facts is that they communicate not only with colors, but also with scents.

The antennae help a female Monarch to perceive the chemical that a male releases from its rear wing glands for attraction to enable mating. They are also useful for finding the way.

When a Monarch butterfly locates a flower with its large, compound eyes, it uses the antennae to smell out the nectar. It then makes use of small receptors in its feet called “tarsi” to taste the nectar.

Monarch butterflies are well known for their long, yearly migrations. In North America, they migrate in large numbers southward from Canada to Mexico. These migrations often start in August and the return journey begins in spring.

But not all Monarchs winter in Mexico. Most of those found west of the Rocky Mountains move to areas in central or southern California. It is estimated that around 5 million of these butterflies travel to smaller sites spread out along the coast of the U.S. state.

There can be four generations of Monarch butterflies in a single year. And each of this will complete all four stages of the lifecycle – that is, the egg, caterpillar, chrysalis/pupa, and adult butterfly stages.

The lifespan of the butterflies varies. Some live for only a few days and others for months. Most generations live between 15 and 50 days before dying off.

The longest living generation is usually that born in late summer or early fall. This group of Monarchs migrates from Mexico to California in search of a warmer climate. They can live for up to eight months.

Migration back to the north begins by the end of March. No single individual butterfly makes the entire round trip.

Monarch Butterflies Can Cross the Atlantic

One of the interesting Monarch butterfly facts is that they are believed to be capable of trans-Atlantic crossing. Not many other insects can attempt such a long journey.

They can fly up to 3,000 miles to central Mexico from the Northeastern U.S. in search of a warmer climate. It has been observed that they travel more than 250 miles in a day! Monarchs reportedly can fly a distance of nearly 5,000 miles a year.

These butterflies are the only ones that make two-way migrations, just like birds.

Monarchs Make the Most of Warm Air for Migration

Now, you may be wondering where Monarch butterflies get the energy to fly for such long distances, looking at how tiny and frail they appear. They imitate the behavior of migrating birds.

The butterflies make the most of updrafts of warm air known as thermals. With the help of these thermals, they can glide as they continue with their migration. This enables them to conserve energy for use later in the journey.

Monarch butterflies have continued to awe researchers with their remarkable sense of direction and location. Some have attributed this to some sort of programming or instinct.

Young butterflies that have never been to the original breeding grounds of their parents have been observed to return to the very habitat their parents lived in before they were born. Isn’t that amazing?

Some people think that Monarchs rely on the position of the sun and the earth’s magnetic field for their migrations.

You Can Raise Monarch Butterflies Over the Winter

Monarchs don’t have to migrate. They simply can’t survive the cold weather. You can continue observing Monarch butterflies and keeping them healthy with the help of butterfly growing kits . You can even get a school kit for larger groups.

These butterfly habitats are reusable, so you can observe the Monarch lifecycle any time you want to. Simply keep the habitat in an area above 55 degrees Fahrenheit and make sure to supply them with enough milkweed, fresh flowers, and fruit to feed on.

Monarch Butterflies Can Fly Higher than Many Birds

Who could have thought that a Monarch butterfly would be able to fly higher than birds? You probably didn’t, but it can.

These butterflies can ascend up to a height of 10,000 feet or more. A Monarch has reportedly been seen at a height of 11,000 feet (more than two miles) up in the air!

It is most likely that you are just learning about some of these Monarch butterfly facts for the first time. As you can see, fascinating things about these butterflies go beyond their distinctive orange and black wings. But this list is by no means exhaustive. There are even more interesting facts about these beauties you might still come across.

Before we wrap this up, let’s briefly go over these amazing Monarch butterfly facts again.